…or how WWE want to attract comics fans into wrestling

Yours truly talked about an interesting (hopefully!) event during the second episode of The Rolistes podcast (you know, the one you commented to say it was awwwwwwwwwwwwwesome!), where Arrow’s impersonator Stephen Amell was involved in the wrestling company WWE for a match at Summerslam during the summer.

I propose here to you a follow-up to go a bit deeper into the story and describe also the match (Yes! Yes! Yes!).

Summerslam is “The Biggest Event of the summer”, and the second most important show of the WWE after the legendary Wrestlemania (And you can believe that!). While the official main event was Undertaker vs Brock Lesnar, another match may have been the main event, at least for non-wrestling fan who have been attracted by the presence of a guest, the actor Stephen Amell (Give me a hell yeah!).

WWE has some history of bringing celebrities from TV in order to create a storyline between the wrestler and the guest. However, most of the time, the celebrity is ties to a manager role, involved on a side of a match: Jericho with Mickey Rourke at Wrestlemania XXV, Hugh Jackman (Wolverine) vs Damien Sandow impersonated Magneto in a Raw, … Sometimes also, the guest has a proper match, like Floyd Mayweather vs Big Show during Wrestlemania XXIV (Everybody has a price!), even if it was more a boxing than a wrestling setup.
But Amell’s match is somehow different for several reasons: it has been planned early on, started in May with a ringside altercation between him and the wrestler Cody Rhodes, with a gimmick known as Stardust (If you smell! What the Rock is cooking).

First thing first: Stardust is directly inspired by comic super villain. Cody Rhodes became delusional and is 100% convinced that he is an actual super villain, for instance dressing like Mister Sinister (DAMN!).

For example, the audience sometimes chant “Cody! Cody!” and as result he holds his head, telling them to stop. So, yes Stardust is NOT a super villain and the WWE does not want you to believe that: only the fact that you believe that Cody Rhodes really believes that is sufficient.
So we have this wrestler/super villain that is in desperate needs of a super hero to fight with. Stardust applies his delusional ideas to Amell: in “kayfabe” interviews, he explained that he doesn’t know any Stephen Amell, just a guy named Oliver Queen behind the mask of Arrow. This is what the storyline between Arrow (and not Amell) vs Stardust is called: “Be my Hero”.

Twitter and interviews posted on the web have been used to build the match, where 2 others individuals will eventually join: Neville (with Amell) and King of the Ring Wayde Barret (with Stardust) who will receive a cosmic dressing from Stardust to become Cosmic King.
Everything still makes sense, because Neville has a “DC-like” presentation with a surname: “The man the gravity forgot”. Stardust will then see a hero in Neville, but will be able to defeat him, leading to taunting Arrow even more.

Arrow and Neville association can also be linked by the fact that Neville finisher (a Corkscrew Shooting Star Press) is called Red Arrow (Rest In Peace).

Red Arrow… I think it is time for the official safety reminder: don’t try this at home, at school, or anywhere.

After another ring side appearance, Amell attack Stardust and Barret who were beating up Neville, and the match is booked. Here again it is realistically done, with HHH (one of the WWE executive) warn Amell about the risk in a match, that he is an actor, lawyer need to be involved to protect against injuries law-suits, … But the match is still setup (And that’s the bottom line, cuz Stone Cold said so!).

So at the end, and maybe the most important: how was the match? Did Amell performed well? Has he achieved to avenge himself or Stardust can now conquer the Universe?
Some doubts were possible before the match, because of the Tag Team format: it would have been possible to see the entire match with Neville on the mat to let Amell just throw a punch at the end to win the match. But it is actually a real wrestling performance that Amell did. He was here to kick ass and chew bubble gum and he was all out of bubble gum.

The match was short for a pay-per-view, with only 13 minutes, video recap and entrance included, for an 8 minutes match. And Amell performs in ring during 5 minutes, in one row!

It was not only offensive move (hip-toss following an esquive involving a backflip, standing enziguri), he also received quite a punishment (way more than the usual guests) including several punch/kick, with one which throw him out of the ring, and a Suplex Slam (German Suplex but sending the opponent face down). Indeed he played mostly a Face in Peril partition, the enziguri allowing him to tag in Neville. But he was not done: he launched himself from the top rope on both Stardust and Barret who were outside of the ring, allowing Neville to hit the Red Arrow on Barret without any intervention possible from Stardust. This is a move even many wrestlers do not perform, so it was very nice to see an actor successfully attempt it. 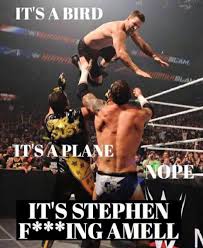 So the super heroes defeated the villains as it is supposed to be. But the fact that Amell seems to really enjoyed the experience, in addition to Stardust not been pinned allows a well-deserved cosmico-diabolico-machiavelico evil revenge plan from Stardust… maybe for the next Wrestlemania XXXII!

I hope you enjoyed the text (and the match of course!). And if you’re not down with that, we got two words for you…. COMMENT IT!

And I let you with this philosophical illustrated citation… and a small game! Several wrestler catchphrases are hidden in the text…can you spot them and assign the corresponding wrestler?